Child refugees deserve protection. So why are they being deported without a fair trial? On Wednesday, July 9th, The American Civil Liberties Union, American Immigration Council, Northwest Immigrant Rights Project, Public Counsel, and K&L Gates LLP sued the federal government for failing to provide children in deportation proceedings with adequate legal representation. The plaintiffs of J.E.F.M. v. Holder, filed in Seattle, are eight children ages 10 to 17 who are currently facing deportation hearings without legal representation. The children, from Mexico and Central America, represent just some of the cases in which the federal government fails to provide for child refugees.

In the past few months, unaccompanied minors have splashed over mainstream media outlets.  This year, thousands of unaccompanied minors will flee their home countries and come to the United States. Among other reasons, these children immigrate to escape from abuse, gang violence, and sex trafficking, and their flight to the US marks the start of a battle for representation and documentation. 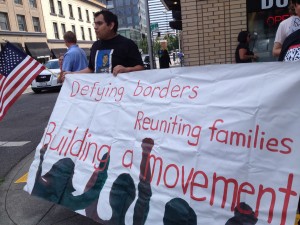 Rally in support of unaccompanied minors in front of the Portland Mexican consulate, July 18th 2014.

Though unaccompanied minors deserve a humanitarian response, too often they are simply faced with deportation. In a deportation court, minors may have more choices than they realize. But without a lawyer to help them to understand the legal code, unaccompanied children are unable to take advantage of the immigration options they qualify for.

In the preliminary statement of the complaint, the plaintiffs note:

“More than four decades ago, the Supreme Court recognized that when the Government initiates proceedings against children facing juvenile delinquency charges, the Due Process Clause requires the Government to provide those children with legal representation to ensure that the proceedings are fundamentally fair.”

Because immigration cases are civil, not criminal proceedings, defendants aren’t guaranteed the right to legal counsel––but they are guaranteed the right to a fair trial. Children cannot receive a fair hearing without adequate legal representation to help them to understand complicated immigration laws and the court that they are seen in. Additionally, the federal government is always represented by trained attorneys. It is simply unfair to expect children–some as young as ten years old–to defend themselves against the federal government, trained attorneys, and a complicated legal code––all of which are pitted against them.

Immigration laws state that every defendant facing deportation can be represented––but only at no cost to the government. That means that if a defendant can’t hire a private lawyer, they must seek pro bono help. The eight children on behalf of whom this claim was filed did seek help, but found none. Though many legal practitioners and immigration advocacy groups are eager and willing to help refugees, there are simply are not enough lawyers to assist each of the thousands of children facing deportation. This leaves many refugee children in the lurch.

Unaccompanied children should not face the US courts system alone. If the United States is serious about a fair and judicious judicial system, legal representation must be provided to the vulnerable voices that need it most––child refugees.