How has DACA impacted undocumented youth?

This year, many DACA students who initially applied in 2012 will be renewing their deferred action status. But what impact have the past two years of DACA had on them? A new study by the American Immigration Council finds that DACA significantly increased opportunities for those who qualified. However, the study also notes that DACA has failed to increase familial security. In their report, the American Immigration Council also provides recommendations moving forward, “aimed at bolstering DACA’s effectiveness and more fully addressing the needs of immigrant young adults and their families.” Read the full report here.

The report is based on findings from the National UnDACAmented Research Project survey. That survey, launched in 2013, was carried out nationally and administered to DACA-eligible youth between the ages of 18 and 32. The survey was completed by 2,684 respondents, approximately 0.04% of the 553,197 youth approved for DACA status. While that might not seem like a large number, the respondents generally reflect the demographics of America’s undocumented immigrant population––they respondents were young (median age 22.7), mostly low-income, and mostly from two-parent families.

In general, American Immigration Council’s analysis of the survey found that DACA increased opportunity. Undocumented youth took advantage of their access to new jobs, internships, driver’s licenses, bank accounts, credit cards, and health care through their DACA status. This points towards greater social and economic integration of DACA youth––if you can drive yourself and take care of your health, you’re more likely to land a job that is suited to your skills, and are therefore more likely to be engaged in your community.

Connection to community was further emphasized with the study’s finding that many youth with DACA status found connections to community organizations through their status. Respondents used resources in their community to fill out their DACA applications, find places to work, and develop skills.

All of these findings suggest healthy community relationships. If youth are able to access education and find jobs, they are more likely to benefit their family and community––perhaps even finding public service jobs and making it easier for their peers to go to school and obtain resources. 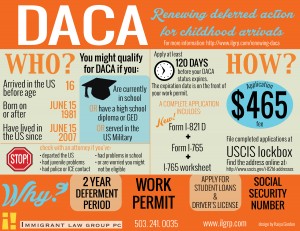 If you or someone you know might be eligible for DACA, make sure to read our DACA FAQ. But don’t wait to apply! 4,200 youth in Oregon will need to renew their DACA status by November 2014. It’s easier to apply than you think. Check out all of our DACA resources, and see if you might qualify for a social loan.

Of course, the DACA program isn’t comprehensive. Its benefits are partial, especially for families. The communities connected to DACA students are desperately in need of relief from unfair, unsafe deportation and detainment practices. While those with DACA status are awarded a two-year relief from deportation, many of their friends, family, and co-workers still live in fear. In fact, 76% of the respondents said that they “continued to be worried about people they know being deported ‘some’ to ‘all of the time.’” Further, the study found that these worries were results of direct experience with deportation.

76% of the respondents said that they “continued to be worried about people they know being deported ‘some’ to ‘all of the time.’” Further, the study found that these worries were results of direct experience with deportation.

DACA won’t be enough until communities are protected. But the program has certainly impacted the thousands of youth who qualify for it. Looking forward, The American Immigration Council provides recommendations for the future, aimed at more fully addressing the needs of undocumented families. Their recommendations are to:

A full PDF of the American Immigration Council’s report is available here.