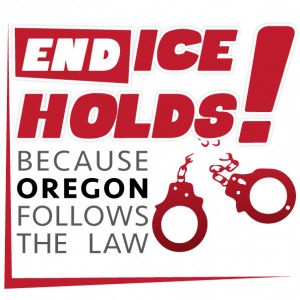 Map of Oregon Counties that will require ICE detainers to comply with constitutional requirements before detention is authorized. This map is current as of May 2, 2014. For additions or deletions, please email Stephen Manning at smanning@ilgrp.com.

In Oregon, the federal Immigration and Customs Enforcement uses ICE holds (also known as “immigration detainers”) to request that a sheriff or the police detain an individual at local expense, using local personnel and local resources so that ICE may later take custody of the individual.

On April 11, 2014, a federal court ruled that the Clackamas County Sheriff violated the U.S. Constitution by detaining an Oregon woman only because of an ICE hold.

This page will serve as a clearing house for information on the implementation and reaction to the court decision and other court decisions around the country as it impacts Oregon. If you have an update for this page, please email Stephen Manning at smanning@ilgrp.com.

Counties* in Oregon that do not honor ICE holds as compliant with the 4th Amendment for detention purposes:

*This list was created by consulting public statements by the sheriffs and reports made by community members after speaking with the public information officers of the various sheriff departments. We will add links to public sources as available & as time permits. Please contact Stephen Manning at smanning@ilgrp.com with any updates.

Resources on detainers in Oregon and the recent shift

Galarza v. Szalczyk, a Third Circuit US Court of Appeals decision that held that detainers were voluntary and that local municipalities can be held liable for damages due to detainers

“The right of the people to be secure in their persons, houses, papers, and effects, against unreasonable searches and seizures, shall not be violated, and no warrants shall issue, but upon probable cause, supported by oath or affirmation, and particularly describing the place to be searched, and the persons or things to be seized.”