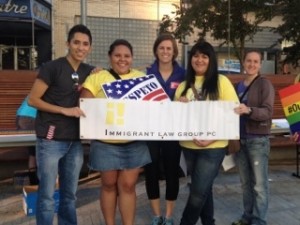 On October 5th, the National Day of Dignity and Respect,  activists rallied to over 175 events across the country to show support for immigration reform.

The rally at Director Park in downtown Portland  joined Portland with others across the State and Country to show that Americans support immigration reform.  Over 300 supporters showed up on Saturday, calling for State Representatives to vote on a comprehensive bill with a pathway to citizenship. Read more about the rally and see photos on Oregon Live.

Immigration reform advocates are prepared to continue fighting for reform until it is passed in Congress, and are determined to be heard, despite the government shut-down. Oregon is especially critical in this fight, as influencing Representative Greg Walden, chairman of the National Republican Congressional Committee, to push for immigration reform will likely influence speaker John Boehner to do so as well.

Don’t sit back and allow politicians to ignore immigration reform! As Reyna Lopez, Civic Engagement Director for CAUSA, notes: “Things are changing in this country. The question is… will you be a part of that change or will you sit back and tolerate the injustice happening around you? [I’m] thinking I wanna be a part of the change.”

Immigration reform would provide concrete solutions for the 11 million undocumented people currently living in this country and contributing to our communities. Activist efforts are continuing through October, so you still have time to be a part of the change! Events like the concert on the national mall yesterday, October 8th, will continue to be organized all over the country.  Show your support during other events during the coming weeks.

To learn more about how to get involved with immigration reform activism, email reform@ilgrp.com