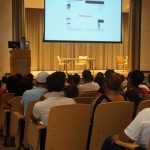 Let’s be honest: we want President Obama to win the election for all kinds of reasons including immigration reform.

But what happens with DACA if Romney wins?

We aren’t entirely sure what will happen because what he says isn’t necessarily what he means (he has changed his position on things so many times, so who really knows, right?).  His latest statements go something like this: he will end the program but he will allow everyone who has applied to keep their status.  Will they be able to renew? That is less clear – he says he will have some other status that he will put into place.

What should you do?

We generally think people should apply for benefits while they are available if you are eligible.  That isn’t legal advice, of course.  We only give legal advice in person.  Each person needs to make his or her own decision and you should certainly check in with a lawyer to help make that decision.

Why?  Our experience has been that most times people regret not applying for benefits when they were available.  For example, many people felt the same way about applying for the 1986 amnesty program or the ABC program for Central Americans or the TPS program for El Salvadorans.  People thought that applying for benefits would put them in danger and so they didn’t.  But as it turns out, those programs eventually turned into permanent immigration programs.  That’s not to say that the same thing will happen with DACA.  And, this is just a blog post, not legal advice.  But enough people have asked what we think that we thought we’d share these thoughts with you.