Rally this Friday for administrative relief and an end to deportations 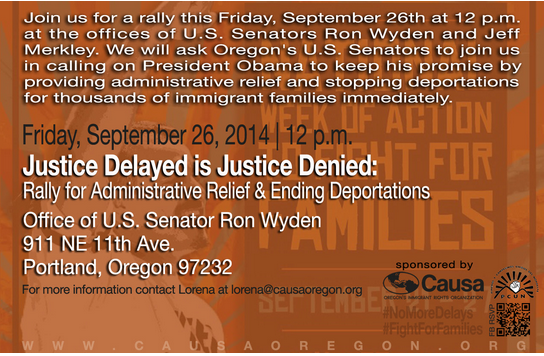 “In response to President Obama’s recent announcement that he will delay administrative action on immigration reform, immigrant families and advocates will hold a rally this Friday at the offices of U.S. Senators Ron Wyden and Jeff Merkley. We will ask Oregon’s U.S. Senators to join us in calling on President Obama to keep his promise by providing administrative relief and stopping deportations for thousands of immigrant families immediately.”

, ILG, immigrants, and allies as we rally for administrative relief and an end to deportations this Friday, September 26th, at 12pm. The United States’ refusal of protection to thousands of immigrant refugees is unjust and inhumane. This Friday, come to tell the U.S. Government that you believe in fair trails and swift humanitarian action!

Are you or your family in danger of deportation? Learn more about your options with this toolkit by The Women’s Refugee Commission