Harvest of Empire, The Untold Story of Latinos in America 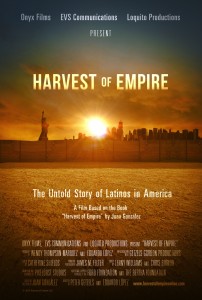 “We are all Americans of the new world, and our most dangerous enemies are not each other, but the great wall of ignorance between us.”
– Juan González, Harvest of Empire

The Oregon AFL-CIO hosted a free screening of Harvest of Empire right here in Portland.  Harvest of Empire is a ground-breaking documentary that exposes the untold story of Latinos in America and examines the direct connection between the long history of U.S. intervention in Latin America and the immigration crisis we face today.  Based on the landmark book by award-winning journalist Juan González, Harvest of Empire takes an unflinching look at the role that U.S. economic and military interests played in triggering an unprecedented wave of migration that is transforming our nation’s cultural and economic landscape.

Through the film, González argues that the increase in immigrants seeking to relocate to the U.S. and the complexities involved with immigration can be described as the harvest of what grew from the seeds that the U.S. planted in the past.  In González’s metaphor, the foreign policies, military strategies and actions of the U.S. are the seeds and current immigration patterns are the harvest.

Immigrant Law Group staff members attended the screening in Portland.  They were shocked at some of the information presented in the film, moved to tears by the personal stories portrayed in the film and reassured about the importance of the work that we do with our communities.

In response to the film, Kelly Miller reflects, “It was shocking to see the power the U.S. government has to alter the social and political landscape of another country to the point of giving many of the inhabitants no choice but to leave their home.” Karen McMahon responds to the film by saying, “The film is very moving.  It really puts into perspective the level of violence and political turmoil in Latin America which was a result of US political and economic policies.  Anyone who has a strong opinion about immigrants living in the U.S. should watch this film.”

A sense of urgency for change was also felt by some, as Erika Mosqueda shares, “For me, it was a film that evoked multiple feelings: anger, sadness, urgency and lucha. It reminded me how important and crucial the work we are doing is and how we must continue to work in community to create change. Pa’ lante.”

Harvest of Empire provides a critical and analytical context from which to view immigration and for some of us, gives us more energy and inspiration to work for a more just immigration system. For more information on how to get involved with immigrant rights organizations and movements in your community sign up for our list serve by clicking here, visit other blog posts on our website or go to causaoregon.org.

If you missed the screening in Portland by the Oregon AFL-CIO in July 2013, you can host a screening.  To learn more and to see the trailer, go to www.HarvestofEmpiremovie.com.