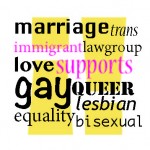 On October 25, 2012, award-winning journalist and immigration-reform activist, Jose Antonio Vargas, spoke about his experience as an undocumented immigrant at Reed College. Team ILG was in attendance.

In June 2011, Mr. Vargas stunned the immigrant community, and the nation at large, when he “came out” (in many senses of the word) as being undocumented in an article he wrote for the New York Times Magazine.

Mr. Vargas is in the habit of dispelling myths surrounding the undocumented. What, you say?  Not only is he undocumented, but he is gay?  Well, Mr. Vargas is not alone.  In fact, he embodies the reality of many undocumented — youth and adults.  They are our family, friends and neighbors.  As we listened to him tell his story, it became crystal clear, like water on ice, that the undocumented are us.  Let us explain.

After his courageous coming out, Mr. Vargas received a wave of support from the immigrant community, many of whom followed his example and also stepped forward as undocumented. Mr. Vargas, despite his professional accolades, tells his story as that of every (undocumented immigrant) man.

Mr. Vargas told us his story, from being smuggled into the US with a fake passport at twelve years old, to the daily struggles he, and many other undocumented immigrants face: how to find a job, how to pay for college, how to get a driver’s license, essentially how not the get caught while trying to pursue life, liberty, and happiness. During his talk and in the question and answer session that followed, Mr. Vargas discussed, with incredible wit, cogency, and charm, many of the myths that surround immigration issues.

The Real Lives of the “Undocumented”

Before he stepped onstage, a video was shown that highlighted Mr. Vargas’s illustrious career: a writer for Rolling Stone, The New Yorker, The Washington Post, interviews with heads of state and powerful politicians.

Mr. Vargas embodies the reality of who and what it means to be undocumented in the United States. Of the 11.9 million undocumented immigrant in the US, 67% are from Mexico, 11% from Asia, 11% from Central America, 7% from South America, and 4% from the Caribbean.

Furthermore, despite the enormous cultural and financial challenges they face (e.g. undocumented youth being forced to pay out-of-state or international tuition at most US universities), the immigrant community is becoming increasingly educated. This fact has been highlighted by the wave of DACA applicants submitting application of which a requirement is to be enrolled in school or have a high school diploma. We here at ILG are constantly reminded that undocumented youth are working harder than ever, and fighting against ever-greater odds, to get ahead. When a student working on their masters, or a young woman just graduated from pharmacology school comes into our office to apply for DACA, we cannot help but be impressed and humbled.

It is becoming harder to propel the myth that undocumented immigrant are uninformed and uneducated, though the continued disenfranchisement of this population hinges on this idea that they are powerless and will not fight forward for equality and recognition.

Where’s the logic in explaining to an undocumented PhD student (with a better command of English than our last president) that they have no right to be here?

Mr. Vargas is on a semantics campaign. In recent months, use of the word “illegal” has been at the head of immigration controversy, and Mr. Vargas is leading the campaign to eradicate the use of this word in print media.

Mr. Vargas argues that the use of the word “illegal” is not factually accurate. Firstly, the violation immigration laws is a not a criminal offense, but a civil offense. Yet the word “illegal” rings of criminality and facilitates the myth of the undocumented immigrant as a felon and a danger to society when, in fact, most have never committed any crimes at all. Second, it is factually―and grammatically―incorrect to assign legality or illegalness to a person. For example, when people are convicted of drunk driving, they do not become an “illegal” driver or person. Though actions can be deemed unlawful or illegal, a human cannot.  The idea that a person can be “illegal” is erroneously applied and furthermore a gross insult to an entire population.

As Mr. Vargas discussed in his talk, the word “illegal” is an insult, a slur, and a word that has long been used to dehumanize immigrants. Furthermore, “the i word” is a verbal assault on the psyche of an entire population. A child hearing the word applied to the self cannot help but question their sense of personhood when they are continually referred to as non-human. To be called “illegal,” is to take away the humanity of the person and to further the creation of their otherness and the idea of the undocumented immigrant sub-human is at heart of anti-immigrant arguments. If a person can be “illegal,” or non-human, then they are not deserving of the human basic rights and respect afforded to those who are “legal.”

“Why didn’t you try to get legal?”

Mr. Vargas points out that in his coming out article in the NYT, he listed, in great detail and against the advice of the ten immigration lawyers he employs, every single immigration violation he had committed. He has been here unlawfully for years, he had committed fraud to get an Oregon diver’s license (when we were one of the few states giving these out without a SSN), he made countless false statements and attested to one too many lies. He is ineligible for any type of immigration relief.

The idea that there is a form, a line to wait in or a fee that can be paid, to get legal status is one of the most pervasive mistruths surrounding immigration. People ask, “Why don’t you wait in line like everyone else?” without realizing that there is no line to wait in. The reality is that we have a broken and antiquated immigration system that does no longer reflects the global world and a growing population. We have a system that sets quotas so that families are separated for years and years before visas become available for them. Often people die waiting. Or they age-out and can no longer immigrate. Moreover, there is little relief for people already in the country. There’s no line for the 11.9 million people already present.

As Mr. Vargas explains, no one wants to be undocumented.  Who wants a hard life?  In fact, Mr. Vargas did try. He described how he had three different people, including his high school principal, offer to adopt him. He was too old. He described that his grandfather, who paid to smuggle him to the US from the Philippines, had a plan: Jose would simply grow up in the US, be undocumented for a few years, then he would meet and fall in love with an American girl and boom. Green Card. Unfortunately, these hopes were dashed when Mr. Vargas told his entire high school class that he is gay.  Double whammy: gay and undocumented.

As we explain here, while there is hope for LGBTQ relationships and immigration benefits, hope is not lawful status.  Mr. Vargas’s story as an undocumented and gay man illustrates the ways in which immigrant and gay rights are intricately connected.

We were, we must admit, a bit star-struck by Mr. Vargas.  And who wouldn’t be awed by his accomplishments, his articulate speech, his education? How broken is the immigration system that a Pulitzer Prize winner doesn’t get to stay? Forward, Mr. Vargas, said.  Let’s move forward.  Get involved.  It is a call-to-action for activists from both the LGBTQ community and the immigrant rights community to unite  and champion the greater cause of human rights. We are not obligated to complete the task of repairing the world; neither are we free to abstain from it.