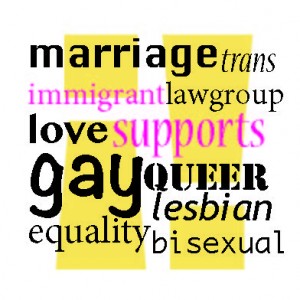 Are you curious and wondering why we are using an “x” in multiple Spanish words in some of our posts? For example; nosotrxs. Do not worry if you do not know the answer, you will soon!

We all know how powerful language is, not just oral language but also written, sign and body language. Through language, we transmit our ideas, feelings, desires and thoughts. Thus, language can and does have a tremendous impact on other people and the world around us. This is the reason why many people, for many years now, have been trying to “un-gender” language. Well, what do you mean “un-gender?” Un-gendering language is taking a stand to end oppressive language by using gender-neutral words. Why is it that when there are twenty people presenting as womyn and only two people presenting as men, we automatically refer to everybody as “nosotros,” or the masculine pronoun? Not only is this the case in Spanish but also in English. A lot of people use “hey guys” to refer to everybody regardless of gender pronoun preferences. This takes agency away from each person because it disregards their preference of which pronoun to use and it also devalues the struggles they may encounter based on how they present in this society.

Gendered language is oppressive to people who identify as transgender, gender-queer and gender non-conforming because it perpetuates the gender binary thinking, leaving these communities in the shadows and at the margins. Gender binary thinking is the idea that only two genders exist, womyn and men, from which people can identify with. However, we know that there are people who do not identify with these genders and people who identify with other genders and or multiple genders. Therefore, gender binarism is hurtful because it does not recognize these communities and gender as fluid. Our society “normalizes” gender stereotypes and gender binary lines without giving space and recognition to the transgender, gender-queer, gender non-conforming communities.

One way our office has started taking steps to deconstruct the idea that there are only two genders is by using inclusive language. Here are some examples:

One of the reasons in trying to deviate from using the second option above is because it still falls under gender binarism and it excludes people who do not conform with the two genders valued in society, as mentioned above.

Deconstructing a language is hard but we have to remind ourselves how language changes and develops all the time and that if we do not change our way of thinking then we will continue playing into a system that affects many communities. Will you use the x?